The technology described in this white paper is covered by U.S. Patent No. 7,877,727

Using BitRouter’s patent pending XSM Technology, television and set top box designers rapidly prototype and deliver new functionality and graphical designs. The underlying software code base remains intact and does not require changes. As a result, design and testing is a much simpler process that can involve creative people who are not necessarily familiar with low level programming languages.

This paper discusses the XML State Machine (XSM) technology and its use for rapid user interface (UI) development. XSM uses generalized hierarchical state machines for creating UIs, where the UIs are defined by an XML configuration file.

TVgui is an implementation of the XSM technology for digital TV devices. This paper asserts the need for the TVgui program, the design approach taken, the XML syntax used to abstract the GUI, steps in creating the graphical assets and XML source code for the GUI, the generalized state machine implementation, and trade-offs of the approach.

Anyone who has been involved in developing user interfaces understands the complexities of that endeavor. First, a human interface development expert analyzes the UI requirements and conceptualizes a user-friendly look and feel. A graphic artist then refines the look of the GUI and creates its media assets. Finally, programmers design and implement the GUI code, integrating the media assets and implementing the feel (behavior) of the GUI. Each step is inherently error prone and time consuming.

In the consumer electronics industry today, design cycles are rapidly shrinking. CE device manufacturers and designers want turnkey solutions that can be customized, tested, manufactured, and delivered to market in a matter of weeks. Frequently, silicon companies and EMS providers deliver reference designs for which OEMs and ODMs build customer user interfaces. These user interfaces need rapid and frequent changes to differentiate products and add unique value to each model. The time required to design and implement the custom user interface is a key bottleneck in the “time to market.”

BitRouter wanted a way significantly improve the process and eliminate this custom user interface bottleneck. Using BitRouter’s XSM technology, OEMs and ODMs rapidly create and customize GUIs for digital TV and embedded devices, such as TV sets, converter boxes and set-top boxes. Using this technology, a GUI can be defined and configured using an XML file. An executable program parses and renders the defined GUI. This is generically called skinning. In BitRouter’s approach to skinning also involves defining the behavior of the GUI, not just its looks.

The resulting program, called an XML State Machine (XSM) engine, is best described as a generalized hierarchical state machine, configurable by an XML file, and targeted at creating UIs. The XSM engine source code is completely reusable. The only difference between different UIs for the same device is the XML code. Coding is simplified to skinning and developing the XML file defining the GUI.

The XML syntax is defined in a Data Type Definition file (DTD). The DTD abstracts out the state machine and GUI concepts. See Listing 1 (DTD Syntax) for reference. 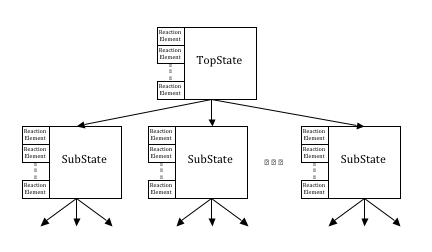 The Reaction element has an enumerated event attribute that defines the event to be acted upon. In the TVgui digital TV application, the XSM engine uses certain middleware services, one of which fills the program’s event queue with input events. Defining the different values of the event attribute was simply a matter of modeling the input event enumerations (for front panel pushbuttons, a remote control, and a keyboard) in the appropriate C header file. To that set of enumerations we added other state machine and GUI-related events. For example an onEntry event so an action can be done when a SubState is entered, an onExit event so an action can be done when a SubState is exited, an onTimeout event when a timer defined in the XML file times out, and an onAny event used, for example, to wake the device up in a standby state upon any event occurring.

The Reaction element has enumerated action and guard attributes. The action to an event can be to do nothing (i.e., swallow the event); transition to another SubState; start, stop, or restart a timer; display or erase an image or textbox; spawn a SubState in another window or destroy a SubState that was spawned; reread the XML file; post another event; and a host of digital TV-specific actions, like turn closed captioning on or off, set a specific audio or menuing language, and so on. The guard attribute qualifies reacting to an event—when the guard is true, the event is acted upon, and when it is false, the event is not acted upon.

Graphically-related elements define the look of a GUI. There are elements representing fonts, textboxes, images, and backgrounds. One reaction to an event may be to display or erase an image or a textbox. For such a reaction the Reaction element can contain an Image or TextBox element.

For use in a menuing context—for example, where a Main-Menu SubState contains a number of other SubStates—a SubState can have one graphical representation for when the SubState is highlighted in its parent SubState (via a MenuEntryOn element) and another representation for when it is unhighlighted (via a MenuEntryOff element). This is how buttons are defined in the XML file. The implementation is such that when a SubState’s graphics are rendered, all of its immediate SubStates are examined for these MenuEntryOn and MenuEntryOff elements so that their buttons can be drawn. When a SubState is cursored over and selected, the default behavior of TVgui is to enter that state. This behavior can be overridden, though, by a Reaction element.

Coupling the state machine nature of a GUI with its graphical nature in the XML file as described leads to a natural way to develop a menuing system. For simple actions, such as setting the audio language or menuing language, SubStates can be used to define buttons which, when cursored over and selected, cause a Reaction element to perform the action. For more complex situations, such as changing a channel or displaying channel and program information, a ViewPort element is used.

A ViewPort is a GUI widget that either controls the middleware in some manner or extracts and displays information from the middleware. By default, a ViewPort becomes visible when the SubState it’s in is entered. The Viewport has events dispatched to it when it gains focus such as by a highlight or cursor moving over it. Likewise, the ViewPort is erased when the SubState is exited. This default behavior can be changed by Reaction elements. Reaction elements are used to turn a ViewPort on or off. ViewPorts are able to accept events once they are on and have focus. A ViewPort’s graphical elements are removed and it is unable to accept events when it is off.

The ViewPorts within a SubState and the SubState’s contained SubStates are navigable items, or hotspots. TVgui has a default navigation algorithm that determines how these items are navigated using Up, Down, Left, and Right events. This default navigation can be overridden with the MenuFocusOverride element.

Steps in Creating a GUI

To create a GUI with this technology, the recommended steps, are, in order:

Since TVgui does not include the XML parser primarily to save memory, a PC-based utility called createbx is provided that creates the binary version of the XML file. The createbx utility uses the libxml2 library from xmlsoft (http://xmlsoft.org/) to validate and parse the XML file. The first thing createbx does is validate the XML file with the DTD, and if that passes, it parses the XML file and checks that the XML file is valid from an application point of view. If the XML file is invalid from either a DTD or an application-specific reason, it logs an error message and exits. So between each of the steps above, or between any significant modifications of the XML, it’s always good to run createbx and see if there are any problems that can be fixed sooner rather than later.

Listing 2 is an example of a relatively simple skin. The TopState defines the fonts to be used in the skin and its Reaction elements define the overall behavior of the skin. TopState contains the three SubStates mentioned previously: Watching TV, Main Menu and Standby.

Figure 1 shows the main menu when it is first entered. Figure 2 shows a channel scan in progress. When TVgui is started for the very first time, there is no channel map data and the skin automatically starts a channel scan to obtain the data. Figure 3 shows how the GUI looks when the main menu is entered and the UP or DOWN key is pressed, so that the Signal Meter ViewPort is shown. 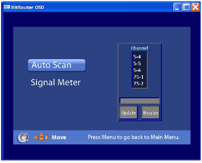 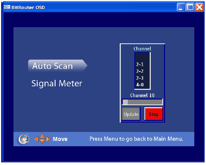 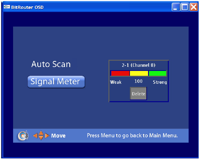 Admittedly, this strategy can create a large number of windows, but so far this has not been a problem. Each port of the middleware has a predefined maximum number of windows, typically 255. The most complicated GUI built so far uses 180 windows.

ViewPort Implementation and Other Considerations

As previously discussed, ViewPorts are GUI widgets that control and display information from the middleware. In essence, they are predefined state machines, having a fixed look and feel. The advantage to this approach is that ViewPorts allow for rapid creation of a GUI; the disadvantage is the limited customization they allow. It’s a trade-off between speed and flexibility. Currently, there is only a ViewPort XML element, with an enumerated attribute named Item identifying the specific ViewPort the element refers to. Customization is limited to setting a coloring scheme that all of the ViewPorts follow, and each ViewPort can use whatever font is defined in the XML file. In the next revision of TVgui, we plan to break out each ViewPort into its own XML element, with its own unique characteristics and options abstracted into its attributes and sub-elements, allowing a much greater degree of customization.

TVgui uses middleware services providing a kernel abstraction layer, event queue, and graphics library, among others. Porting TVgui requires porting these middleware components to the new target. This means that once BitRouter’s TVrefpak has been ported to a target, there is no further porting required for TVgui. Besides rapidly creating GUIs, TVgui has also proven to be a handy test application for the middleware components.

From a GUI design perspective, the main difference between the various boards TVgui has been ported to is their On Screen Display sizes. Typically, a skin made for one board will not look appropriate for another; it may look squashed, stretched, or too small, or the graphics components wind up in unexpected places. Graphics from one skin to another may be reusable, and one can play tricks using XML entities, but each skin is more or less specific to a particular board.

Using the same basic TVgui a designer can implement multiple DTV devices, such as an ATSC converter box, an integrated TV, a connected home TV, etc. Once all the underlying hierarchical state machine infrastructure is in place within TVgui, its use for different devices is achieved by manipulating the XML skin. Optionally, the underlying state machines (ViewPorts) that are not required for a particular device may also be compiled out, rather than disabled using XML.

BitRouter has implemented a commercial ATSC converter box using the TVgui application. The complete skin for this product is defined by only 2,200 lines of XML code. This is a key strength of the XSM and  action ac technology. OEMs and ODMs need only manipulate 2,200 lines of XML to personalize the product for market introduction. A person-year of GUI development and testing has been reduced to a week’s worth of XML editing. And, no C/C++ level source needs to be released to the OEM or ODM.

About the Author: Robert Sharp is a Principal Software Architect at BitRouter where he develops applications for digital TV devices. He is the inventor and principal patent applicant for the XSM technology. He holds an MSEE from San Diego State University