CAPstack is BitRouter’s implementation of the digital TV closed captioning standard specified by EIA-708 and mandated by the FCC order number “FCC 00-259”. CAPstack also implements CEA-608 to process 608 data carried within the 708 stream or within line 21 of the VBI. CAPstack provides a robust and portable solution for implementing the software stack needed by a TV receiver to process and display closed captioning data. The implementation meets the following high level goals:

EIA-708 offers a data rate of 9600 bps as opposed to 960 bps offered by CEA-608 for analog. For picture/text synchronization purposes a data channel is allocated on a frame by frame basis such that 1200 bytes are transported per second. 960 bps is allocated for NTSC data and 8640 bps for digital.

CAPstack implements EIA-708 in a five layer architecture. The yellow and green blocks, below, are provided by CAPstack. The Font Engine is typically third-party software, although BitRouter can provide the FreeType font engine. 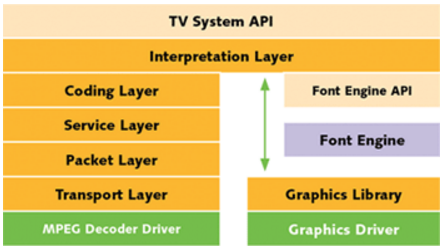 The heart of the closed captioning system is the window. Windows contain text. Windows and text have attributes. PMT & EIT (EIT is optional for cable) carry the DTVCC Caption Channel Service Directory. This is described in the caption service descriptor defined by ATSC A/65B. CAPstack implements a safe-title cell grid of 210 x 75 for 16:9 and 160 x 75 cells for 4:3 displays. This grid is used for window positioning not text positioning. CAPstack implements a TV Systems API to allow a GUI application to override styles and attributes. Optional user controls may consist of caption font size, caption color and caption intensity.

A single service can support a maximum of eight windows and three font size – small, standard & large. Window size may change when a user changes font size. As mandated by FCC 00-259, all eight fonts specified in EIA-708 are supported. Each of the eight windows have an overlap priority. Each window has nine anchor points. Window expansion, when font size is changed, happens based on the defined anchor points. Each window has “lock row” and “lock column” parameters. These define whether the receiver can adjust the number of rows or columns.

Rendering parameters include print direction, scroll direction, cursor movement & carriage return behavior. The display-effect parameter controls include snap, fade & wipe. Windows have colors & borders. Borders can be raised, depressed, uniform or drop-shadowed (left or right). Colors, text-painting and effects can be customized. Predefined styles can be stored in the receiver as defaults in order to conserve bandwidth. This definition is dynamic on a per program basis.

Pens have styles, spacing & font styles. Fonts can be subscript, superscript, normal, italics or underlined. Foreground color & opacity of characters can be defined as transparent, translucent, solid or flashing. Characters are placed in background boxes which have their own color and opacity. Edges have same opacity as a character but their color can be defined separately. Edges can be missing, raised, depressed, uniform or drop-shadowed. Caption text can have function tags like dialog, speaker id, electronically reproduced voice, dialog in non-primary language, voiceover, expletive, etc. Character attributes can be overridden to suit the viewer’s preferences.

Delay and delay-cancel commands are allowed for pre-sending information.
CAPstack and all other BitRouter stacks are standalone individual products that can be used as part of BitRouter Paks or integrated with non-BitRouter software.